How to make better measurements with your oscilloscope or digitizer 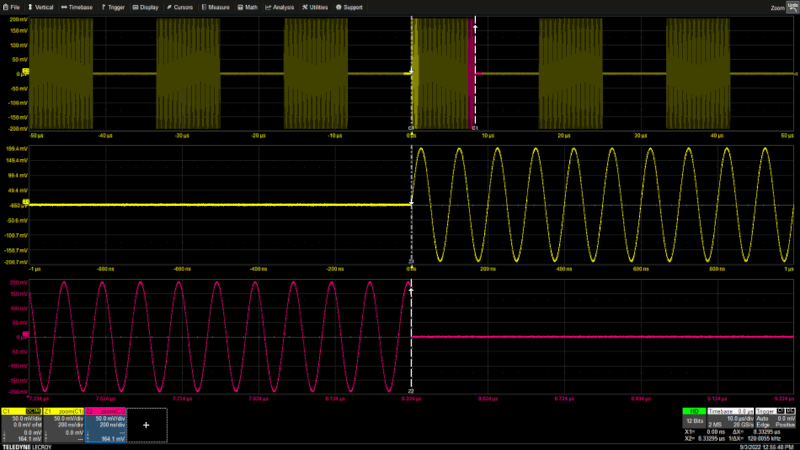 Modern oscilloscopes and digitizers are getting better and better. Higher bandwidth, better vertical resolution, and longer acquisition memories. Not to mention more firmware tools for application-specific measurements. With all these advanced analysis capabilities it is sometimes hard to remember some very old and simple rules that can improve the accuracy and precision of your measurements.  Here are a few good ideas to help.

Use the full dynamic range of your instrument’s front end

Digital instruments feed their input signals to an analog-to-digital converter (ADC). The dynamic range of the ADC is related to its number of bits of resolution. The instrument matches the input signal to the ADC input voltage range using attenuators or amplifiers. If the input to the ADC is less than its input range, it reduces the total dynamic range of the ADC. This can happen when users set up multiple traces on the screen.

Some oscilloscopes and digitizers display software only offer a single display grid. If you try and display more than one signal trace at full dynamic range, the signals overlap, making it hard to view them. Most people faced with this problem reduce the vertical scaling of each channel. If you have four traces, just increase the volts per division setting by a factor of four. Each trace now occupies only a quarter of the screen and all four traces fit on the screen with no overlap. Problem solved? Not really. You just reduced the dynamic range by two bits, you made your eight-bit oscilloscope a six-bit oscilloscope. You attenuated the signal, but the internal noise of the instrument is the same, the signal-to-noise ratio is now worse by two bits.  Figure 1 shows the effect of the loss of dynamic range.

Figure 1 An example of the decrease in signal-to-noise ratio due to reducing the signal amplitude in order to fit multiple traces on a single grid.

The bottom grid shows the original signal acquired a 50mV/division. The top trace shows the trace acquired at one quarter of the full screen or 200mV/division.  If you vertically expand the attenuated trace and display it at the original 50mV/division, the vertical noise has increased significantly as you can tell from the thickening of the displayed trace. Measurements made on the attenuated trace will have increased uncertainty due to a poorer signal-to-noise ratio. This is not a problem for an oscilloscope or digitizer that has multiple grid displays, each grid displays the signal at full dynamic range and multiple signals can be compared, each in its own grid. If you don’t have access to a multiple grid oscilloscope, make sure that any measurements are made on the full amplitude signals, reserve the attenuated signal for visual comparisons only.

Use signal processing in the form of averaging or filtering to reduce noise, improve dynamic range and measurement accuracy.  Ensemble averaging, where the nth samples of each acquisition are averaged together over multiple acquisitions, reduces Gaussian noise proportional to the square root of the number of averaged signals. This can bring a low level signal out of background noise for better measurements. It does require multiple acquisitions.

The acquired signal is an exponentially damped sine wave. The top trace shows a raw acquisition. Note that the signal disappears into the noise about three quarters of the way across the screen. The center trace shows the average of multiple acquisitions. In the bottom trace, a Gaussian low pass filter has been applied to the acquired signal. Both averaging and filtering reduce the noise and improve the dynamic range of the measurement. The signal is clearly discernible after either type of signal processing.

Improving the accuracy of cursor measurements

Cursors are vertical and/or horizontal lines that can be moved over the oscilloscope or digitizer display to mark significant points on a waveform. Cursor readouts show the time or amplitude of the waveform at the cursor location as shown in Figure 3. The waveform is a keyed RF carrier and the horizontal relative cursors are used to measure the width of the RF burst. This is a measurement that cannot be made with the instrument’s automatic measurement parameters. The cursor horizontal readout appears in the lower right-hand corner under the timebase annotation box, it reads 8.06275 µs.

Figure 3 Horizontal relative cursors are used to measure the duration of an RF pulse burst.

Is that really the duration of the burst? The answer is no. This waveform has two million samples in the acquisition. The horizontal screen resolution is 1920 pixels. So, it’s obvious that not all the samples are shown on the screen. Instrument manufacturers apply compaction algorithms to reduce the number of displayed points. They manage to show significant points like peaks but there is still a lot that you can’t see unless you expand the display.

A more accurate way to make this measurement is the used the zoom traces to horizontally expand the waveform at the start and end of the RF burst as shown in Figure 4.

Figure 4 Using zoom traces to make more accurate placements of the cursors at the first and last sample points of the burst.

Figure 5 IEEE Standard 181 bases pulse measurement parameters on a statistical determination of the top and base values of a measured pulse.

In almost all cases, the measurements made using measurement parameters are far more accurate than those made using cursors. They are also made automatically saving a great deal of time.

The amplitude measurement reports that 11,873 values are included in the statistics. The mean or average value is 237.5457 mV. The mean value is reported with a higher resolution than the last value because the mean is an averaged value. As we saw in the waveform, averaging the averaging process improves the vertical resolution of the measurement, the same thing happens if you average multiple measurements, hence the more significant figures in the mean value.

The largest value is 241.5 mV reported as the maximum, the smallest value, minimum, is 234.8mV. These values can help detect transient events that occur during the acquisitions. Other tools can plot measured values versus time to see when transient events occur and match them in time with possible sources.

These tools and techniques can help improve the measurement accuracy and reliability of your instruments. Other tricks can be gleaned from manufacturer’s webinars and application notes. The more you learn about your instrument, the more accurate and reliable your measurement results will be.

Arthur Pini is a technical support specialist and electrical engineer with over 50 years of experience in electronics test and measurement.