Modern radio receivers have a distinct advantage over the common early designs which I covered in my previous article. Most of the receivers you will have worked with over the past couple decades are designs by Edwin Armstrong; regenerative, superregenerative, or most commonly superheterodyne. These are distinguished by a few fascinating key traits that bring both benefits and drawbacks.

Today let’s dive into Mr. Armstrong’s receivers. I’ll also talk about DC receivers which, despite the name, are not made to listen to batteries. These are receivers you are much more likely to encounter in modern equipment.

The regenerative receiver is all about doing more with less. You still see some of these in simple applications like RF remote controls. The idea derives from how an oscillator works. In a simple way of thinking, an oscillator is an amplifier with enough positive feedback that any tiny signal at the right frequency will amplify and then, through feedback, continue to output over and over. If everything were perfect, then, an oscillator would have infinite gain at a given frequency.

Of course, things aren’t perfect, but they are close enough. You have to set the feedback network up just right to get the frequency you want. Also, things in nature tend to be linear, so it isn’t like the amplifier has no gain at the given frequency and then suddenly has infinite gain. The gain increases until it meets the Barkhausen criteria and achieves stable oscillation. 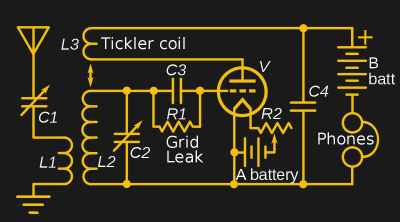 In fact, sometimes we want to build an amplifier and find that it oscillates for some reason. Maybe that’s what made Edwin Armstrong think about the regenerative receiver. In it, an amplifier is pushed almost to the point of oscillation at the frequency of interest. This can result in a huge gain for a single tube or transistor. This was especially important when using low-quality active devices. For example, a tube capable of a gain of 10 without regeneration might amplify between 5,000 and 10,000 times when it was right on the edge of oscillation.

That’s a big improvement and meant that a very simple device could pick up very distant radio signals. There are many ways you could arrange positive feedback. However, the most common way (as in the accompanying schematic) was to have a pickup coil called a tickler around the primary tuned circuit coil. If that coil was out of phase, you’d get negative feedback, so common advice on this kind of radio was that if it didn’t work after you built it, try reversing the leads of the tickler.

The superregenerative was another design by Armstrong. It is essentially the same circuit, but after a certain frequency higher than the bandwidth of interest, the design stops the oscillation action allowing it to build again. Armstrong called this quenching. This could improve gains into the neighborhood of a million times. Armstrong’s original demonstration of the concept showed a three-tube receiver that was as sensitive as a nine-tube conventional design.

There are some downsides to both of these designs, though. You usually have to adjust the regeneration and the circuit can easily go into oscillation, producing a squeal. It also radiates signal back out the antenna, so it is a sort of transmitter. This is bad for interference or — for military applications — where you wish not to be found. If you want to build your own, we’ve had some advice for you in the past, including some on a breadboard. If you prefer, you can just simulate one that [Qrp Gaijin] demonstrates in the video below.

Armstrong was also behind the most successful architecture of all, the superheterodyne. If you have a non-software defined radio, it probably uses this technique. The idea is simple and has to do with selectivity. Consider the TRF radio. You can get better performance by putting more stages ahead of the detector. But each stage has to cover the entire range of the radio and requires tuning when you change frequency.

Armstrong’s idea was to limit that. You may or may not have one relatively broad filter in front of a mixer that adds (and subtracts) two RF signals. Then a local oscillator provides another signal to the mixer. Suppose you want to receive a signal at 1 MHz and you set the local oscillator to 9 MHz. You’ll get a signal at 10 MHz (and 8 MHz). You can now filter that 10 Mhz signal and amplify it using filters and amplifiers that you don’t have to tune (at least, not more than once). This makes their design simple and is also less hassle for the operator.

Now, if you want to receive a signal at 1.1 MHz, you change the local oscillator to 8.9 MHz. You still get a 10 MHz signal. If there is a station at 1.2 MHz, you’ll also get a signal at 10.1 MHz, but since you have the 10 MHz filters and amplifiers, you can get rid of that easily. That 10 MHz, in this example, is the IF or intermediate frequency.

This is a great way to build a radio. You can pile on gain and selectivity by adding more IF stages. The only real downside, as I mentioned in the last article is the possibility of images. Because the mixer both adds and subtracts, you can hear a station at the wrong frequency. Consider our 1 MHz signal with a local oscillator frequency of 9 MHz. A 19 MHz signal at the antenna will also show up at the 10 MHz output of the mixer since 19-9=10, just like 1+9=10.

There are several ways to get over that. First, you can filter before the mixer. That’s why a lot of radios have a band switch — well, it is at least one of the reasons. You select a filter that roughly cuts out the interference from images. High-quality receivers will use dual conversion where one mixer produces one IF signal that is later mixed again to form a second one. Some will even use more conversions to optimize filtering.

There are several ways this can help. Image frequencies are always at twice the local oscillator frequency. Going back to the 1 MHz signal example, the image is at 2×9+1=19 MHz. So the higher the IF, the easier it is to filter off images. As a silly example consider if the 1 MHz receiver used an IF of 61 MHz. Now the local oscillator will run at 60 MHz and the image frequency will be at 121 MHz. It is trivial to filter 1 MHz from 121 MHz.

The problem is that using a higher IF makes it more difficult to reject stations adjacent in frequency. In our extreme example, filters to select between 61 MHz and 61.02 MHz are going to be more complex and costly than ones that select between 10 MHz and 10.02 MHz. Granted, there are surface acoustic wave filters and other devices that can do the job, but typically the best performance for a given cost is going to go to the lower frequency filters and amplifiers.

If you want a nice overview of the superheterodyne that isn’t too technical, check out the video below.

The direct conversion (DC) receiver has seen a resurgence in use since many software defined radios use this as a front end before digitizing the signal. You can think of a DC receiver as superheterodyne where the local oscillator doesn’t produce an IF, but instead is set to the frequency you want to receive. That means the output is the detected radio signal.

Using our 1 MHz example, to tune it in, you set the local oscillator to 1 MHz. The output is what you’d normally process with an audio amplifier (in the case of AM radio). The design has several practical problems. If the local oscillator isn’t locked to the transmitting station, the output will be incorrect. With SDR, that’s not a problem because the SDR software can track any shifts, but if you don’t have a computer handling things, it requires a lot of components to stay on frequency (essentially, a phase locked loop).

On the other hand, images are all at low frequencies and easily rejected. A lot of simple ham radio receivers use this technique because you don’t need a lot of frequency-specific amplifiers and filters that require tuning.

If you want to start designing receivers, the best bet is to build some and see how they work. It is hard to beat the simplicity and performance of a regenerative receiver. Sure, a crystal set is easier, but it won’t pick up like a regen. Using the NE602 or NE612 mixer is a handy way to make a direct conversion receiver with only a little more work. You can use that same mixer in a superhet design, but it is definitely more work.

Even if you are using SDR, you usually need some kind of front end. There are a few more exotic designs we didn’t talk about. If you want to read about Hartley, Barber Weaver, and other interesting topics, A Texas A&M presentation on the topic will fill you in.

Of course, the best way to learn is to go build something! There’s no shortage of design ideas for every kind of radio we’ve discussed. Once you start tweaking on real hardware, you’ll quickly find out what works and what doesn’t.

Acknowledgment: Most of the pretty pictures of block diagrams and schematics were adapted from public domain sources on Wikipedia, particularly from [Chetvorno]. What a great resource.

You used to be able to tell a die-hard ham radio operator on the road by the number and length of antennas protruding porcupine-like from their vehicle. There are still some mobile high frequency operators that have respectable car-mounted antenna farms, but they have nothing on Alfred H. Grebe. In 1919, he fitted a medium wave transmitter in his car that operated around 2 MHz. Since it needed a very large antenna, Grebe rigged a wire antenna that looked like a clothesline between the two bumpers. Obviously, you had to stop, set up your antenna, and then operate — you couldn’t talk and drive. But this may have been the world’s first automotive radio setup for voice communication.

The car had a separate battery for the radio and a dynamotor to generate high voltage for the tubes. Although many radio enthusiasts found ways to add receivers to their cars in the 1920s, it would be 1930 before Motorola made radios especially for cars in production quantities.

That wasn’t what Grebe was most famous for, though. He worked as a ship’s operator After making a few receivers for friends, he decided to open up a business. Grebe radio, though, is hardly a household name today. But he was best known for setting up radio stations, including founding the station that would eventually become WCBS, often called the father of news radio.

We always enjoy learning about radio pioneers including Edwin Armstrong and Reginald Fessenden. This is certainly a far cry even from the old mobile telephones.