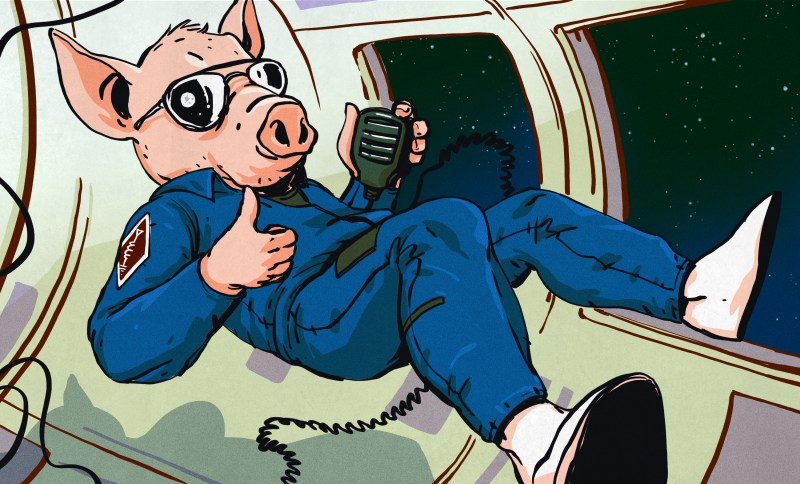 Humanity had barely taken its first tentative steps into space with primitive satellites when amateur radio operators began planning their first satellites. Barely four years after Sputnik’s brief but momentous launch and against all odds, OSCAR 1 was launched as a secondary payload from an Air Force missile taking a spy satellite into orbit. Like Sputnik, OSCAR 1 didn’t do much, but it was a beginning.

Since then, amateur radio has maintained a more or less continuous presence in space. That first OSCAR has been followed by 103 more, and hams have flown on dozens of missions from the Space Shuttle to the ISS, where pretty much everyone is a licensed amateur. And now, as humans prepare once again to journey into deep space via the stepping stone of the proposed Lunar Gateway, amateur radio is planning on going along for the ride.

A Gateway to Deep Space

More properly known at the Lunar Orbital Platform-Gateway or LOP-G, the Lunar Gateway is intended to be a way-station between the Earth and the Moon, and thence to the deeper parts of the solar system and beyond. Like the ISS, the Gateway will consist of multiple modules serving specific purposes, all docked together into a space station that will serve as a staging area for both crewed and robotic missions. The Gateway will also be a collaborative station, with corporations and agencies from multiple nations contributing hardware

Unlike the ISS, though, the Gateway will be fairly limited in size and therefore in the scope of missions it will host. Although it will have room to accommodate small crews for up to three months at a time, there is no intention to keep the Gateway permanently crewed like the ISS is. The Gateway will serve mainly as a cosmic rest stop, a place where astronauts and hardware can meet up before the final push to the moon.

The Gateway has met with a fair amount of criticism from a wide range of commentators, from former astronauts to space agency administrators to journalists and academicians. Most of the criticism seems to be based on the feeling that humanity’s push back into deep space is not nearly bold enough, and that instead of going on a “been there, done that” mission to the Moon, we should instead just head to Mars. And those who feel that returning to the Moon is a valid goal seem to think that a space station waypoint would just be an unnecessary expense that would hinder investment in the technologies needed for a direct-to-Moon mission.

But as is often the case, all of this criticism is trumped by the realities of orbital mechanics. As Brian Benchoff recently explained, the Lunar Gateway opens up nearly the entire surface of the Moon to our exploration, including the interesting bits near the poles that hold all the water. Without the Lunar Gateway and it’s extremely weird orbit – more on that in a second – all we would have access to on the Moon is basically the same mid-latitude areas pretty much every mission has visited for the last sixty years. Sure, we could land a mission at the equator and take a MoonMobile to the poles, but that seems pretty foolish – why drive when you can fly?

Weird for a Reason

A little detail about the weird orbit the Lunar Gateway will use is in order, as it will tie into the ham aspect of all this. As Brian pointed out, the orbit is referred to as a “near-rectilinear halo orbit”, or NRHO. A glance at the orbital path shown most often in media packs and other supporting information for the Lunar Gateway appears to show the space station in a polar orbit around the Moon, but with occasional mid-orbit reversals, seemingly in opposition to the laws of physics. What exactly is going on here?

To understand the NRHO and how it will affect Lunar Gateway operations, including amateur radio access, you got to look at the orbit from another angle. All those loopy looking animations mentioned before represent the orbit when viewed from a Moon-centered inertial frame. That makes the Lunar Gateway appear to regularly move retrograde, in much the same way that the combined orbits of Earth and Mars make the Red Planet seem to move “backward” in the night sky. The NRHO from the Moon’s frame of reference can be seen in the bottom right of the video below.

However, when looked at from an Earth-centered frame of reference, the NRHO starts to make more sense. The Lunar Gateway is actually in orbit around the Earth, or more correctly, around the Earth-Moon L2 Lagrange Point. The Lunar Gateway will be in a constant game of follow-the-leader with the Moon, catching up with it every week or so only to flung back down below the orbital plane to repeat the cycle.

The unusual orbit the Lunar Gateway will follow is inherently unstable, and will require the occasional boost to maintain it. NASA has specified ion thrusters for station-keeping, which contribute to the need for 60 kilowatts of solar power. This should mean that whatever ham gear makes it aboard the first module of the station, the Power and Propulsion Element, or PPE, will not have to compete for power, at least initially.

So what gear is actually going to make it to the Gateway? For now, that’s mostly an open question. Planning for the ham station aboard the Gateway is the job of AMSAT, the Radio Amateur Satellite Corporation, which is the outfit behind the OSCAR satellites. They’ve formed a working group called AREx, or Amateur Radio Exploration, which has been meeting twice a month to decide which bands and modes will be supported; this in turn will help define the equipment needed.

Whatever gear ends up flying, we can assume that making contact with the Gateway will be at least moderately challenging. For comparison, contacting the hams aboard the ISS is fairly easy, needing little more than a simple homebrew antenna and a mobile transceiver or even a decent handheld. On the other end of the scale, it’s tempting to assume that since the Lunar Gateway will be most of the way to the Moon, making contact will be about as difficult as Earth-Moon-Earth, or EME, contacts. EME is uber-ham stuff, often using huge, steerable antennas and powerful transmitters to blast the Moon with signals so that a weak echo will come back down for another ham to receive. The path loss for EME is on the order of 250 dB or more depending on frequency, and the technical challenges of digging a signal out of the galactic noise are significant.

Luckily, hams won’t be relying on passive reflections from the Moon’s surface to make contacts, so contacts should be easier. Chances are good that a tracking antenna will still be needed, but the antenna required will probably be far more modest than some of the elaborate EME antennas in use today. The 2-meter band (144-146 MHz) is often used for EME, so it’s quite likely that it’ll be used for the Lunar Gateway too. We can also guess that weak-signal digital modes like JT65, with its powerful error correction, will be supported. Also, since the Lunar Gateway will not be permanently crewed, chances are good that some automatic stations will be up there, perhaps a packet digipeater, or digital repeater, like the ISS has.

Almost all of the details of the amateur radio presence on the Lunar Gateway remain to be seen, but given how early in the design process hams were looped in, the design of the spacecraft, its orbital dynamics, and the proven record of ham radio in near-space, chances are excellent that hams be able to talk to someone in deep space within the next five years or so.