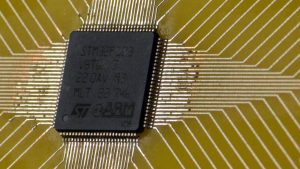 Hackaday regular [befinitiv] wrote into the tip line to let us know about a hack you might enjoy, wireless UART output from a bare STM32 microcontroller. Desiring the full printf debugging experience, but constrained both by available space and expense, [befinitiv] was inspired to improvise by a similar hack that used the STM32 to send Morse code over standard FM frequencies.

In this case, [befinitiv]’s solution is both more useful and slightly more legal, as the software uses the 27 MHz ISM band to blast out ASK modulated serial data through a simple wire antenna attached to one of the microcontroller’s pins. The broadcast can then be picked up by an RTL-SDR receiver and interpreted back into a stream of data by GNU Radio.

The software for the STM32 and the GNU Radio Companion graph are both available on Bitbucket. The blog post goes into some detail explaining how the transmitter works and what all the GNU Radio components are doing to claw the serial data back from the ether.