Hams see Dark Side Of The Moon Without Pink Floyd 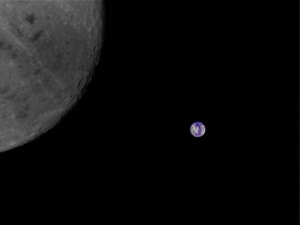 Ham radio operators bouncing signals off the moon have become old hat. But a ham radio transmitter on the Chinese Longjiang-2 satellite is orbiting the moon and has sent back pictures of the Earth and the dark side of the moon. The transceiver’s main purpose is to allow hams to downlink telemetry and relay messages via lunar orbit.

While the photo was received by the Dwingeloo radio telescope, reports are that other hams also picked up the signal. The entire affair has drawn in hams around the world. Some of the communications use a modulation scheme devised by [Joe Taylor, K1JT] who also happens to be a recipient of a Nobel prize for his work with pulsars. The Dwingeloo telescope has several ham radio operators including [PA3FXB] and [PE1CHQ].

You can find technical particulars about the satellite on its web page. There are also GNU Radio receivers and information about tracking. If you want to listen in, you’ll need some gear, but it looks very doable. The same page details several successful ham radio stations including those from [PY2SDR], [CD3NDC], [PY4ZBZ], [N6RFM], and many others. While the Dwingeloo telescope is a 25-meter dish, most of the stations have more conventional looking Yagi or helical antennas.

If your Mandarin is up to it, there is live telemetry on that page, too. You might have more luck with the pictures.

For working conventional satellites, you often need an agile antenna. We suspect the lunar orbiting satellite appears to move less, but you’ll have other problems with more noise and weak signals. Although hams have been bouncing signals off the moon for decades, they’ve only recently started bouncing them off airplanes.